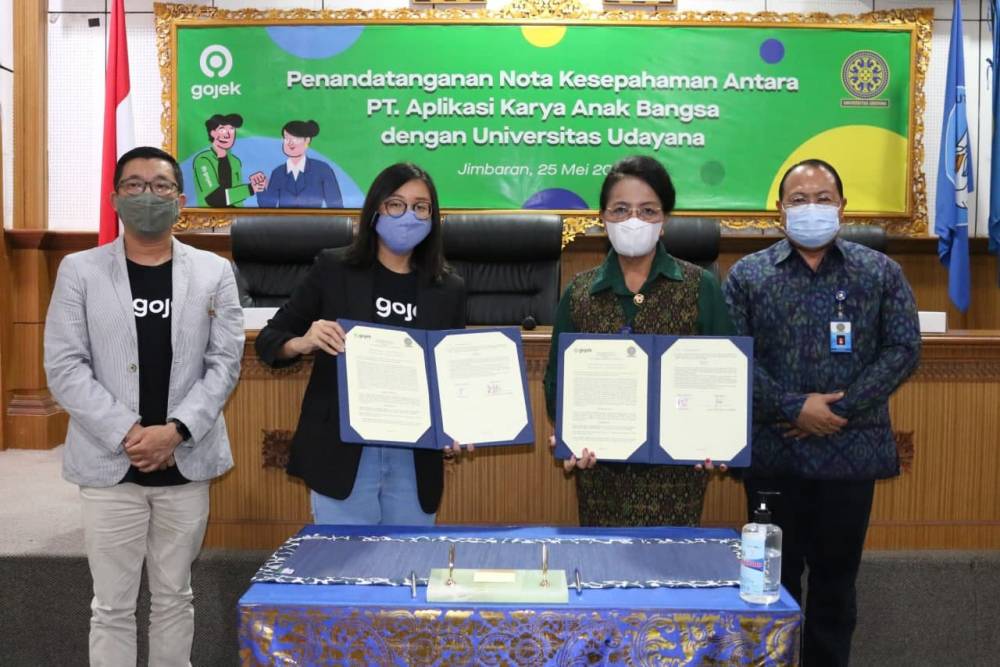 Tuesday (25/5/2021), a Memorandum of Understanding was signed between Udayana University and PT Aplikasi Karya Anak Bangsa, better known as “Gojek” at the Nation Room, Rectorate Building, Jimbaran Campus. The signing ceremony was attended by the Rector of Udayana University, Vice Rector, Head of Bureau, Deans, Heads of Institutions and Heads of USDI, while from the "Gojek" side, it was attended by District Head Gojek Bali and its ranks. 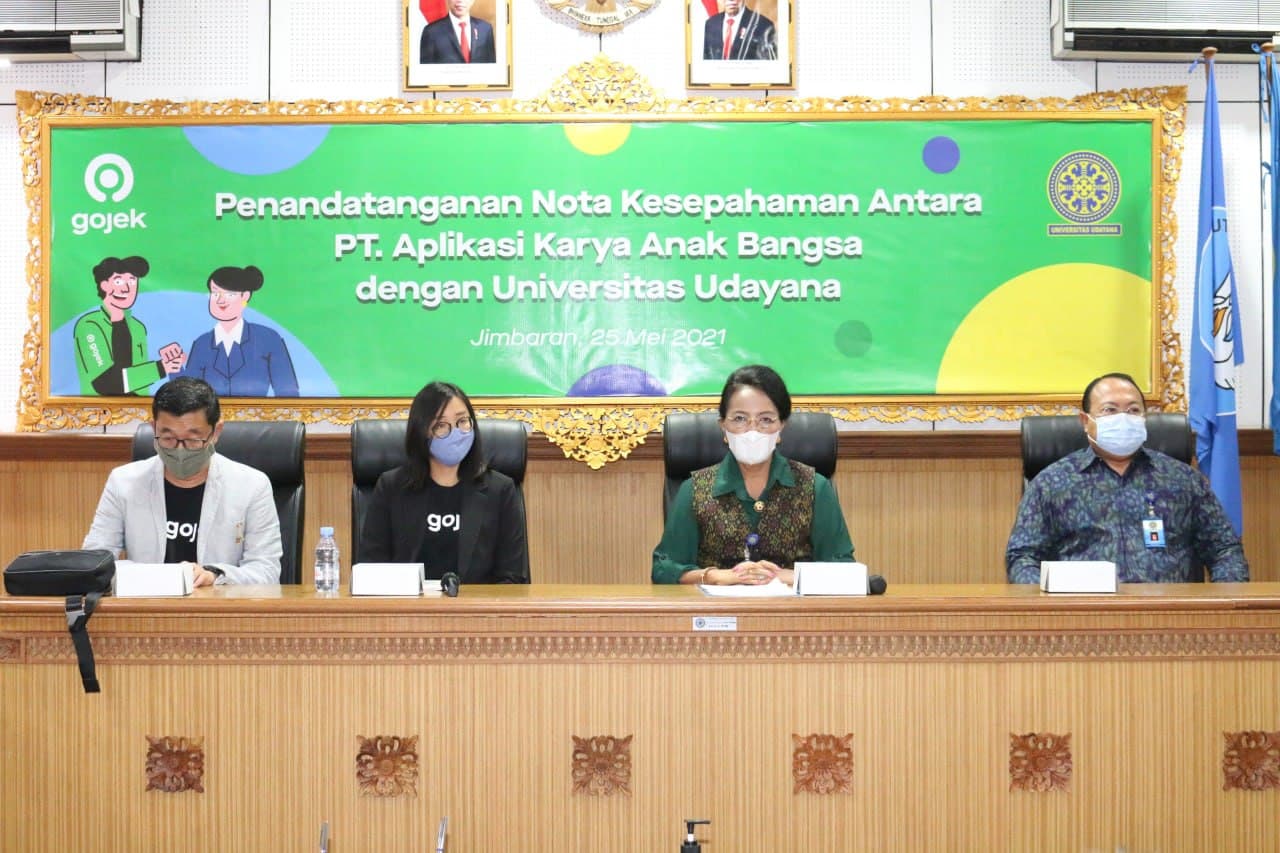 Rector of Unud Prof. A.A Raka Sudewi in his speech said that Gojek has been widely known in Indonesia and has even expanded to several neighboring countries. In addition to the various advances that Gojek has made through the various applications provided, Gojek has also signed MOUs with various universities in Indonesia, and one of them is held today with Udayana University.

The collaboration carried out with Udayana University as stated in the scope of the field of cooperation is cooperation in the Tri Dharma of Higher Education which includes education, research, and community service. The scope of cooperation referred to is quite broad in scope which can later be followed up in various technical collaborations, one of which is currently being actively promoted, namely the Independent Campus Learning Program (MBKM) which was launched by the Ministry of Education, Culture, Research and Technology, where students can carry out the program. internship program, and gain work experience which can later be converted to meet course credit.

The Rector hopes that through this collaboration, he will be able to produce various innovations in helping students take advantage of technological advances, and see new opportunities in exploring digital business. Various other technical collaborations can also be carried out by involving thirteen related faculties at Udayana University and other work units such as the Business Management Agency, by seeing the potential of each which is in line with Gojek's work program in order to contribute to the advancement of the world of education, especially at Udayana University. 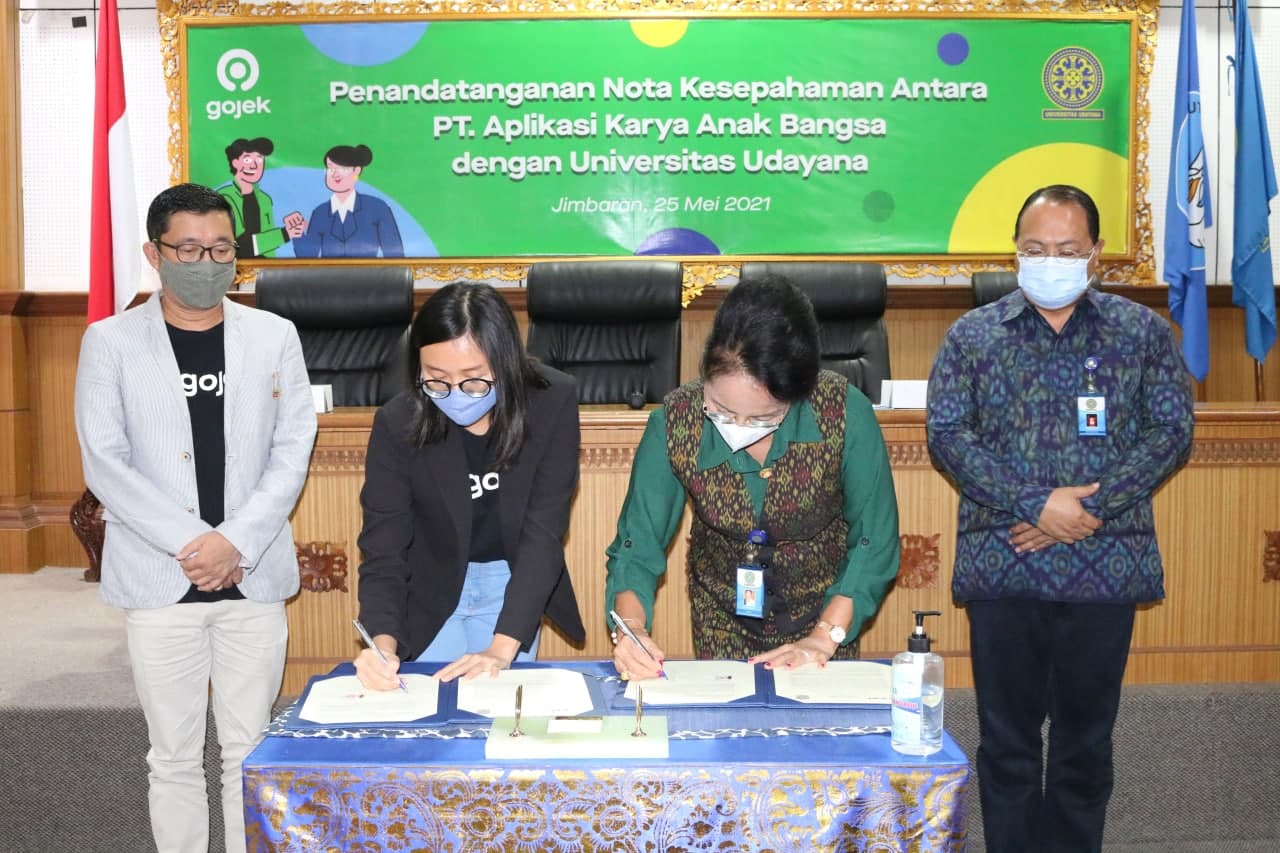 Meanwhile, Gojek Bali District Head Viona Ong expressed his appreciation for the opportunity for cooperation from Udayana University. This cooperation is very important and strategic for the progress of our nation in the future. Because the pandemic has drastically changed, the challenge from Gojek is to support the digital economy, how to build our MSMEs to be equally prosperous and independent, but this cannot be done alone and a collaboration is needed. Nearly 90 percent of the Gojek team comes from Udayana University, so this collaboration is important for Gojek to be able to help solve problems in the industrial sector, where there is a gap between needs and industry. Through collaboration with Udayana University, we can jointly support the implementation of the Tridharma of Higher Education which is expected to jointly produce students who are able to build the nation and the digital economy and produce start-ups and new businesses. The collaboration will be continued with various faculties at Udayana University so that they can actively participate in supporting the implementation of Tridharma, one of which is the independent learning program. This collaboration is also expected to provide more benefits with the spirit of mutual cooperation.