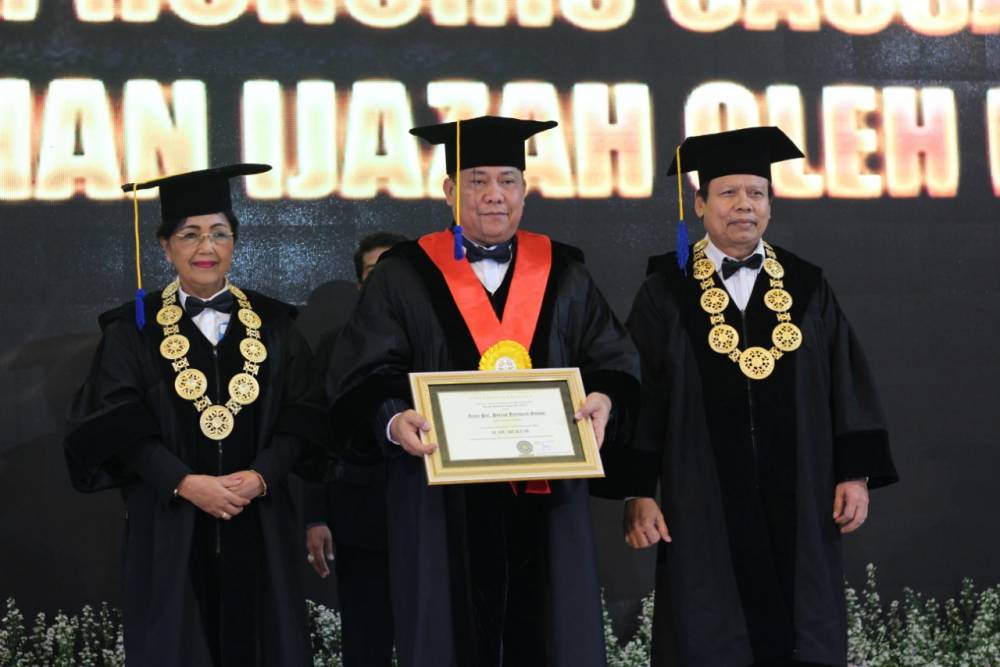 Inspector General. Pol. Petrus Reinhard Golose delivered his scientific speech entitled "Strategies for Combating Transnational Organized Crime (An Implementation of Law Enforcement in Bali Region). He conveyed that Transnational Organized Crime actually happened in the community, such as terrorism, drugs, and cyber crime. "This dynamic has not been regulated in Standard Operating Procedure in overcoming it, thus encourage me as Bali Regional Police Chief who is also a law enforcer to apply the principles of science to concoct an energy model, between police science and law in answering legal challenges," he said.

Through his leadership as the Bali Regional Police Chief, the Chancellor of Udayana University, Prof. Dr. dr. A A. Raka Sudewi, Sp., S (K) conveyed the community's paradigm of the police, especially in Bali Province that experienced positive changes. Inspector General. Pol. Petrus Reinhard Golose has also provided various breakthroughs, one of which is conducting research with Udayana University and the University of Indonesia, related to the community's assessment of the internal police. "We see the performance of Mr. Inspector General of Police. Petrus Reinhard Golose, who is also the Head of the Bali Regional Police, has succeeded in changing the paradigm of the Police, especially in Bali and his performance is able to secure Bali from terrorism, drugs and other crimes, "said Prof. Raka Sudewi.

Inspector General. Pol. Petrus Reinhard Golose was appointed as the Bali Regional Police Chief on 12 December 2016. In addition to serving in the Police, he also became a permanent/ extraordinary lecturer at the Postgraduate of the University of Indonesia, Defense University, STIK, Sespimmen and Sespimti, and the Indonesian National Defense Institute. He also productive in developing various legal disciplines, including the legal fields of organized crime, economic and corporate crime, internet crime, and national and international terrorism crimes.

The awarding of an Honorary Doctorate degree aims to provide recognition and respect for one's services in the development of education, research, and community service to have an impact on science and welfare of society. This is the third time for Udayana University. The two honorary titles were previously awarded to the 2003 Nobel Prize for Chemistry, Dr. Peter Agre on March 24, 2017, and to Prof. Takuya Marumoto, Ph.D from Yamaguchi University on June 30, 2017. (dsk, ad)