IMPROVE THE COMPETENCE OF LECTURERS, LP3M UNUD HELPS THE P2KPT 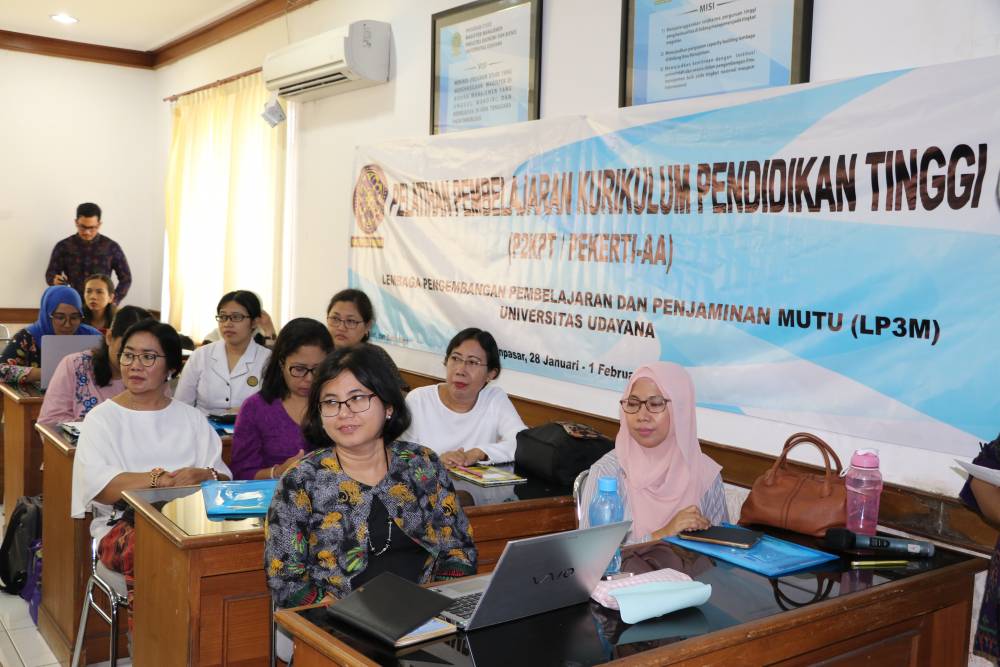 Denpasar - Udayana University Institute for Learning and Quality Assurance (LP3M) held a Higher Education Curriculum Learning Training (P2KPT) which is equivalent to Pekerti Applied Approach (AA) Training in the Faculty of Economics and Business Building, Sudirman Campus, Denpasar. The training which took place from 28 January to 1 February 2019 was opened by the Rector of Unud, Prof. Dr. Dr. A.A Raka Sudewi, Sp.S (K) and was attended by 69 participants from the Udayana University environment.

Chairperson of the Organizing Committee, Dr. Ir. Ni Nyoman Suryani, MS in her report said that P2KPT training on a regular basis had been running twice in a year, namely in January and July before the lecture began so participants could focus on participating in the activity and not be disturbed by the teaching process. The material presented in the training is always updated according to the development of the world of education. Participants who take part in the training are expected not only to obtain certificates, but later to be able to implement what has been obtained in the learning process.

Rector of Unud, Prof. A.A Raka Sudewi in her speech said that the improvement of lecturer competencies needs to be improved in an effort to answer the challenges of the world of Higher Education. Another challenge that is not less important is the implementation of network learning (SPADA). Starting in 2018, Unud decided to give an incentive of five million rupiah for 42 lecturers whose courses successfully passed the PJJ clinic. The incentives were given at three and a half million rupiah when it was declared to have passed verification and the rest was paid when the course was implemented as blended-learning. The Rector hopes that participants will take this training seriously so that they are able to prepare a Semester Learning Plan (RPS) which can later be followed up to become an RPS in online learning. For lecturers who have implemented online learning beforehand, it can be increased to the secondary level to become a course whose credit can be transferred to participants from other universities who are partners of Udayana University. (HM)