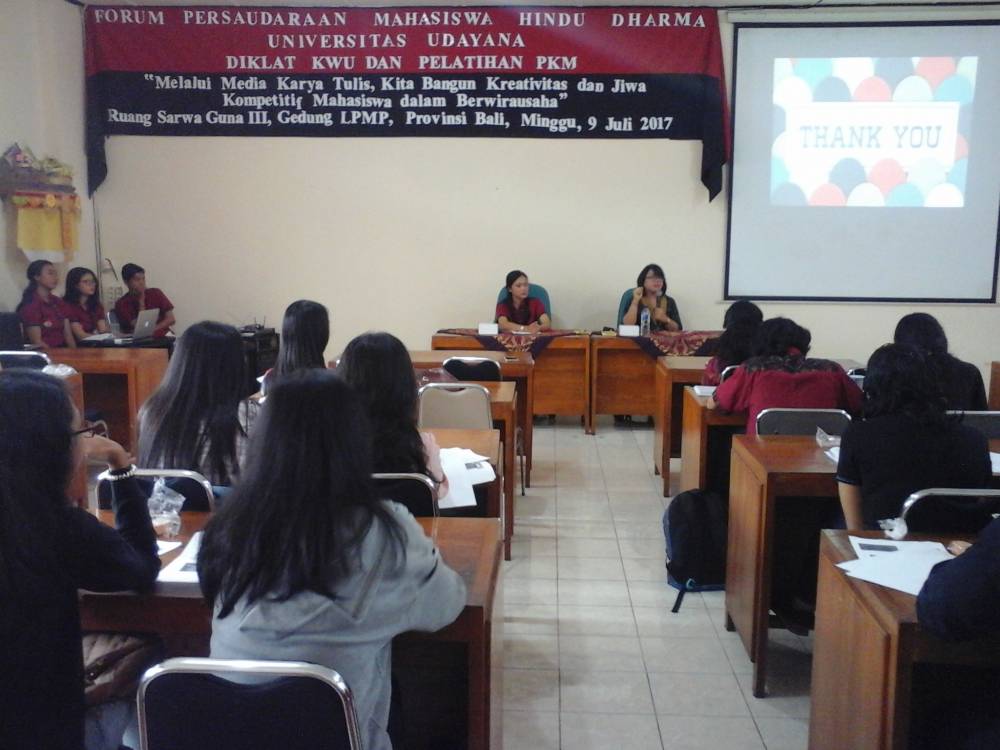 Denpasar - Sunday, July 9, 2017 FPMHD (Forum of Hindu Dharma Students Fraternity) of Udayana University organized "Entrepreneurship Training and PKM" activities. This activity was an annual work program that has been implemented since last year. The theme taken this year was "Through Media Papers, We Build Creativity and Competitive Soul of Students on Entrepreneurship". This activity was held in Sarwa Gatra III room, LPMP Building of Bali Province at Jl. Letda Tantular No. 14 Renon Denpasar. Participants who attended this event were total to 25 people who are the students of Udayana University and Mahasaraswati University.

The committees of this activity were total of 25 people who are FPMHD UNUD functionaries. This activity was somewhat different from last year, that it was only the entrepreneurship training itself, while in this year also added the material about student creativity program. Ni Putu Sukma Novi Wijayanti as the committee chairman in this activity hoped that next in the future, the team will be able to finalize the objective concept a long before, thus the training objective can be achieved, i.e. PKM proposal which is ready to be uploaded in DIKTI.

"The activities that are very useful, fairly primary and important. In the future, the entrepreneurship will play a deeper role in supporting the development of Indonesia. This kind of activity should often be carried along with a growing number of participants. This due to the benefits which are great and very important for students ", said I Putu Budi Utama, one of the participants, who is student from FEB Udayana University. In addition, he also hoped that the next year activity should be continued, if needed, can be added more sessions of one day training and one day practice. "Because the student creativity and entrepreneurship program always associated with direct practice", he said. (dessrimama)