Welcoming the Anniversary of FISIP, BEM FISIP UNUD Held It with FO 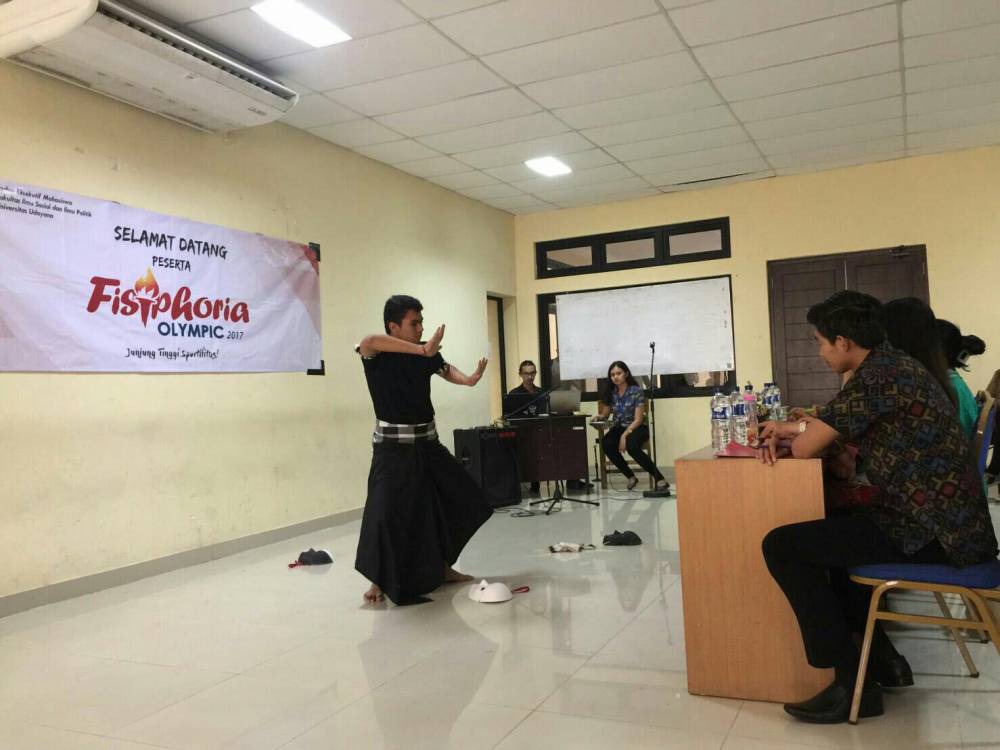 The atmosphere of the talent test, the branch of the Jegeg Bagus race in Fisiphoria Olympic (28/05)

In order to welcome the anniversary of Faculty of Social and Political Sciences (FISIP) Udayana, Student Executive Board (BEM) FISIP Udayana held an activity entitled 'Fisiphoria Olympic'. This activity has become an annual work program owned by BEM FISIP Udayana. Fisiphoria Olympic is aimed at the event of brotherhood for all courses in the environment of FISIP Udayana, by competing in every race in the FO. FO also aims to dance and filter the seeds that will be advanced to the Dies Natalis Udayana University. This activity is packaged in the form of interpersonal matches, as well as several branches of the game open to the public. The competition in this event are Billiard and Futsal for public and Scientific Writing Competition (LKTI), Basketball, Chess, Badminton and Jegeg Bagus for internal. Because so many branches of the competition are being held, the performance of each race is held in different place and time.

For futsal competition which was held on May 20th, there were 14 teams to join this competition. The participants who can join in this game are general people who are still under 25 years old, and the team that has joined in this match some of them are University of Warmadewa, Unmas, and others. For another race category, Billiard, had been held on May 26th, where there were two categories in this competition. For the singles category followed by 64 participants, and for the team category followed by 16 teams. This race branch was held at The Ship, Teuku Umar, Denpasar.

Furthermore, there was also a competition for internal faculty, which consists of 5 branches of the competition. LKTI Competition held on May 26th, located in Rector Meeting Room, Agrokomplek Building, Campus Sudirman Udayana. Where in this game, there presented jury who came from several lecturers that exist in FISIP Udayana environment. And there was a badminton competition for the internal race, held at Pengyu Urip GOR, Gatsu, Denpasar on 26th of May. In the branch of the basketball race, held on May 28th, 2017 which took place in SMP 2 Denpasar. For the chess competition was done at Agrokomplek Building, Sudirman Campus, Udayana on Sunday, May 28th, 2017. All of these internal competition branches involve participants from each study program in FISIP Udayana environment to represent their prodi to compete against other prodi. This internal race was a race of the sixth study programs in FISIP Udayana.

To keep all the above competitions well and smoothly, of course, the committee has done so well prepared preparation. Preparations made by the committee has been going on since three months ago, starting from about last February. Preparations that have been made by the committee among others is certainly starting with the formation of the committee, coordinating with various parties, opening the registration to find participants from the general public, determine the concept of the event, find the location of the implementation of each branch of the race, to meet the technical needs of the day H day. According to Trisna, "This FO activity becomes our important title because, in addition to looking for people who will compete in Dies Natalis later, FO also can be one event to bring together all courses in Fisip Udayana in one chance", said Trisna. (mimi)