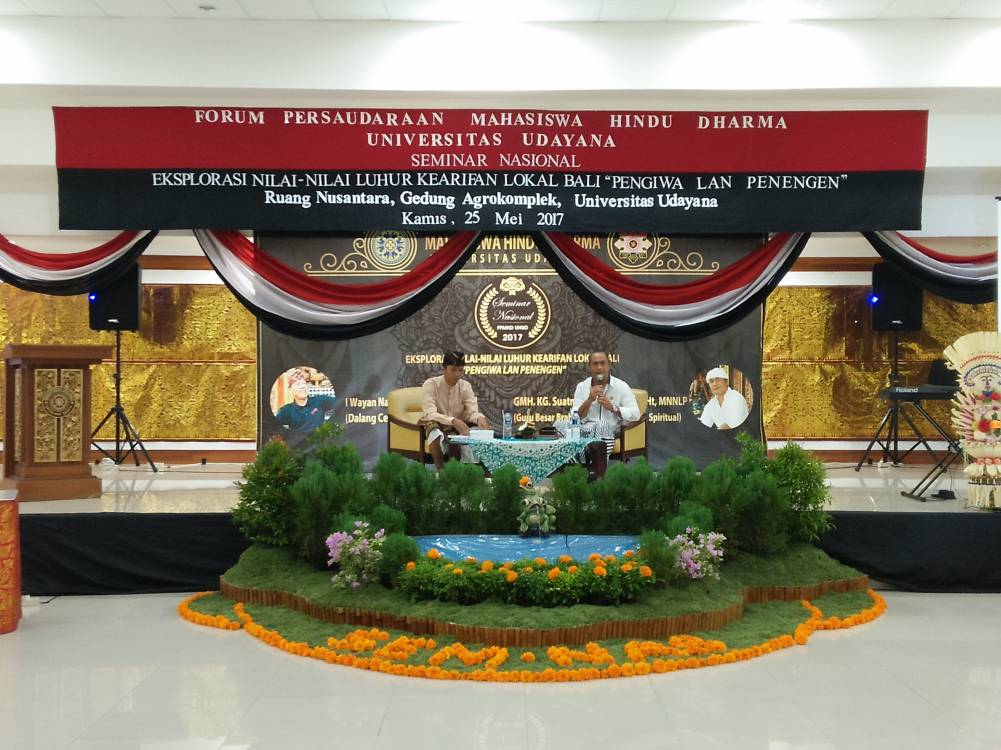 Denpasar, (25/05) Hindu Dharma Students’ Association of Udayana University held a National Seminar 2017. This year, the theme is the exploration of the noble values of local wisdom Bali "Pengiwa lan Penengen."

"It is based on the community's perspective on the different of pengengwa lan penengen, and people are more likely to consider it as a pengeleakan." Clearly said by Ni Wayan Dewi Safitri as Chairman of the Organizing Committee.

Pengiwa lan Penengen is a collection of mantras that contain magical teachings that are part of weda sruti.

The event was attended by two speakers, GMK. KG. Suatmayasa SH, CH, Cht, MNNLP as Brahmakunta Professor and Spiritual Motivator, and I Wayan Nardayana, S.Sn, M. Fil. H as the Dalang Cenk Blonk. The first speaker explained how the Penengen is used positively and can be useful to oneself. While the second speaker discussed the science that is considered bad on the left religious sect  that can basically be directed to the truthful way.

This activity aimed to change the bad perspectives of magical science, and add to the knowledge that the Balinese are not always considered mystical and negative. The event which took place in Nusantara Room, Agrokomplek Building, Udayana University was attended by participants from various circles, both students, community and youth organizations outside Hindu Udayana University.

This National Seminar is a continuation program of FPMHD Udayana University which takes place every year. Through this seminar is expected to change the stigma of a negative society and if it is wrestling in the occult science to be used with the best of it. (lie)