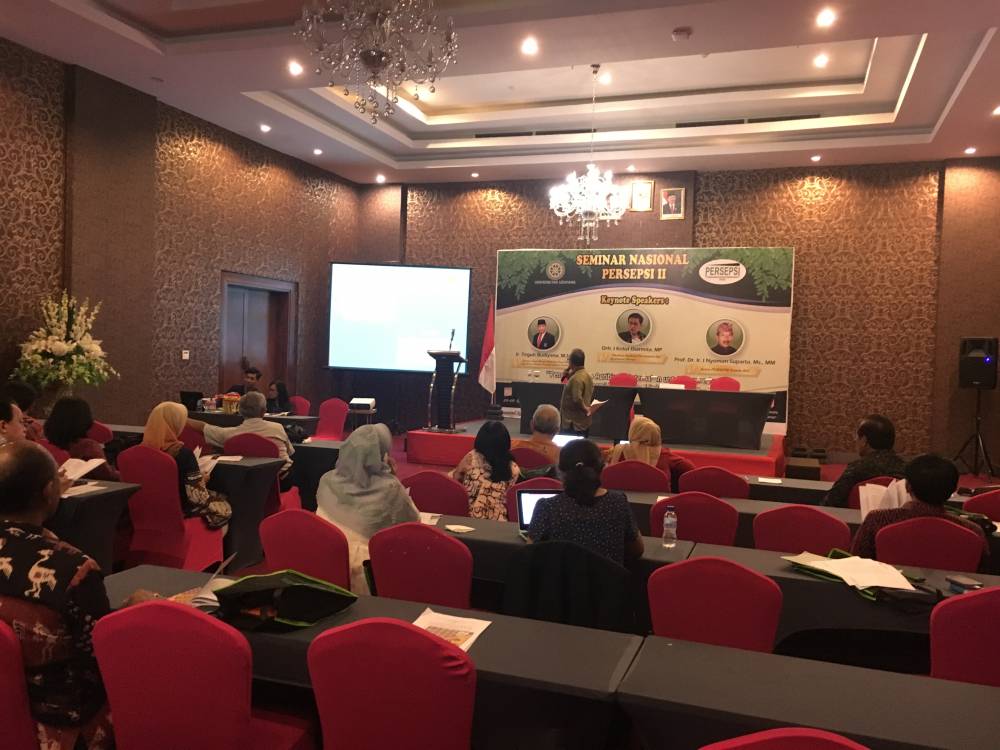 The atmosphere of Parallel Scientific seminar which is the second session of the National Seminar II which is in Room 2.

Denpasar, (28/4) was held National Seminar II by Association of Indonesian Socio-Economic Scientist Komda Bali (PERSEPSI). The seminar was entitled "Development of Livestock Agribusiness to Strengthen Rural Economy in Indonesia" which was attended by all universities in Indonesia, both Lecturers and Practitioners.

"The reason why we have to strengthen rural economy because livestock breeding in Indonesia is mostly carried out in rural areas where farming is usually done on a small scale and then management is still simple and often a side business, looking at the condition, the farms do not have a position in the market so they only production alone, but through this marketing arises discontinuity between the price at the producer and the price in the consumer. Well how do we eliminate this obstacle, would be a problem for farmers and the government, because that is the basis of our thinking to make this seminar. " said Budi Rahayu Tanama Putri, SPt., MM. As the Chairman of the Organizing Committee of National Seminar II.

The keynote speakers that fill in the first session that is Drh. I Ketut Darmita, MP as Director General of Animal Husbandry and Animal Health, with the topic "Government Policy in Agribusiness Development of Cattle to realize National Beef Self-Sufficiency, and continued by Prof. Dr. Ir. I Nyoman Suparta, Ms., MM as Chairperson of PERSEPSI Komda Bali, with topic "An Efficient Beef Production Strategy to Increase Farmers Farmer's Income," and Ir. Teguh Budiana, M.Sc as Chairman of the PPSKI Central Executive Board and Chairman of the Board of Indonesian Farmers with the topic "Local Cattle Trade Strategy to strengthen Rural Economy in Indonesia."

Located at Favehotel Tohpati, Jl.WR Supratman, No. 288, Denpasar, National Seminar II was attended by 110 participants consisting of lecturers and practitioners from all universities in Indonesia. This activity lasts for two days, and on 29 April, Field trip will be held precisely at Sobangan Cow Breeding Center, Beratan Lake, The Sila's Agrotourism, Tanah lot.According to Dr. Budi Rahayu that the results of the discussion will be summarized and reported to the Director General of Animal Husbandry and Animal Health and Ministry of Agriculture, it aims to be a suggestion for policy further. (arisugama)