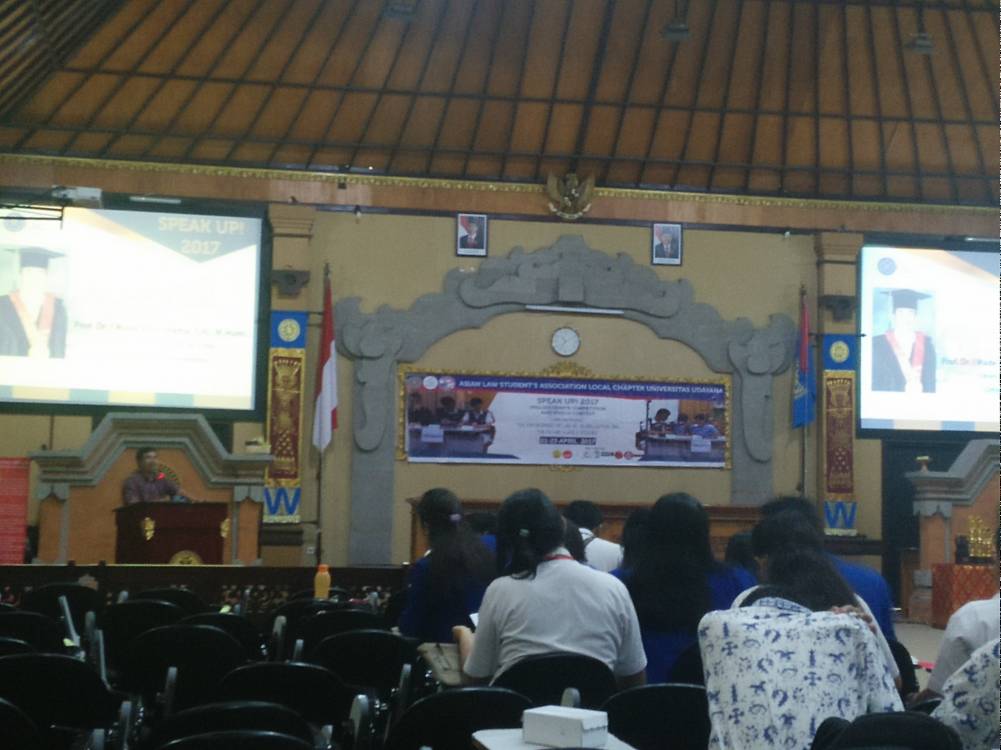 The atmosphere during a speech from the Dean of Udayana University Faculty of Law As well as inaugurated the implementation of the English Debate Competition and Speech Contest.

Asian Law Student's Association Local Chapter Udayana University hosts the English Debate Competition and Speech Contest. This competition lasts for three days ie 21 to 23 April 2017 held at Udayana University Faculty of Law. The theme behind these two competitions is "the enforcement of law in globalization era: the future plans and policies." The purpose of holding this competition to accommodate the younger generation to be able to express opinions and ideas related to the issues that are becoming the latest issues.

Executives from the English Debate Competition and Speech Contest are members of ASLA Local Chapter Udayana University. The Asian Law Student's Association is an international organization of ASIA and ASEAN and local chapter or part of the ASLA National chapter Indonesia located at Udayana University.

Debate participants who have attended the English Debate Competition

In addition, participants who joined the contest speech contest amounted to 8 people and for the debate competition there are 10 teams listed. The participants consist of high school / vocational students in Bali, including SMAN 1 Kuta, SMAN 1 South Kuta, SMAN 1 Denpasar, SMAN 2 Denpasar, SMAN 3 Denpasar, SMAN 4 Denpasar and SMA Kristen Harapan. Both of these competitions are one of the work programs that take place every year from the activities of ASLA members local chapter Udayana University. The winners will be awarded the Award Charter from the National Craft Council of Denpasar City.

“I hope the participants here can think about how planning related development decisions and globasisasi that is happening with the legislation and invitation legislation, where the future problems can be overcome. "Mella Manika said as Chairman of the ASLA Competition Committee Speak Up. (arisugama)