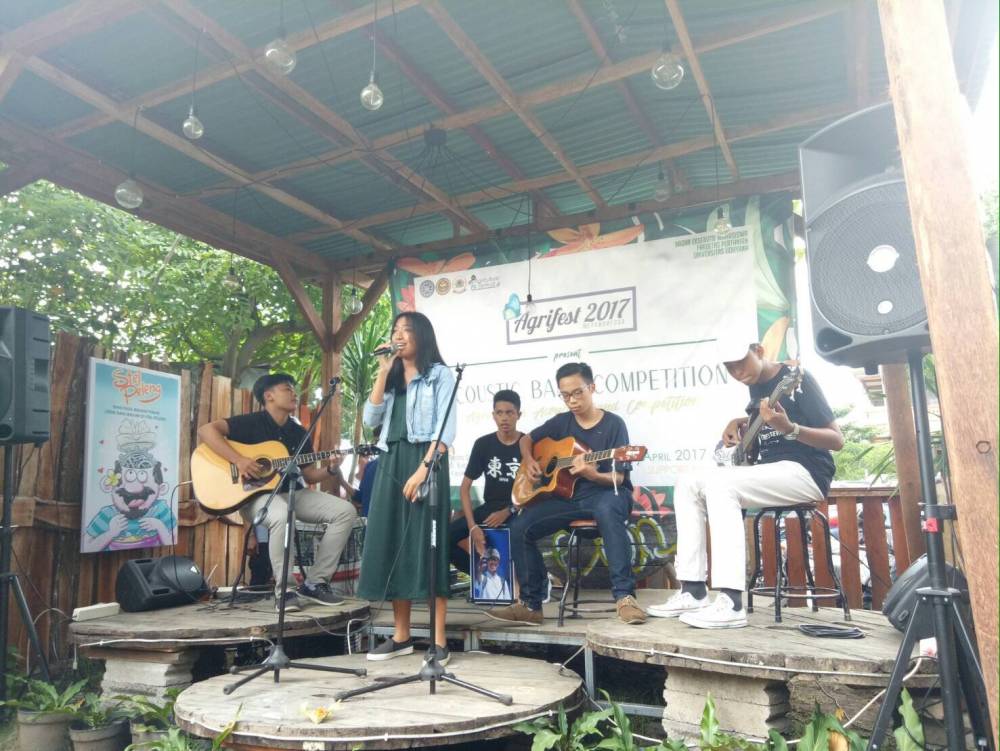 In order to implement the program of BEM Faculty of Agriculture, Sunday (09/04) held Band Competition events in Agrifest as representative of the event which is known by the Agriculture Music (AM) at Stel Peleng, Denpasar. This activity was greeted with great enthusiasm from the community, where it appears with 17 bands participating in the competition. The participants of this activity cames from a variety backgrounds, there are derived from Denpasar, Buleleng, Klungkung, even also attended by high school students and vocational school. Get attention and enthusiasm of the public, the committee would also prepare a good preparation for the success of this competition. As preparations are underway committee was initiated by formulating the concept of the event, opened registration of participants that have been implemented during one month, and of course before H day the organizers worked hard to prepare the equipment and also the venue.

This preparation also take around two months. The criteria set by the committee was to be purely acoustic terms of both arrangements, the instruments used, vocal technique, stage action, and also skill. To assess and determine the winner in this competition, the organizers have presented three judges namely, June Bintang which acts as the main jury, Dangu, and also Riski who is the guitarist of the Pgymy Marmoset band. Participants must bring two songs that consist of one anthem and a free song. As for some of the songs shall be provided by the organizers that can be chosen by the participants, including the Fix You - Coldplay, Let Her Go - Passenger, Hospital - Apr Stars, dear - Apr Stars, Monochrome - Sincere, and some the other songs. According to Gusti, as Vice Chairman of this activity, the reason of committee considers this event to be an interesting activity because of acoustic currently hits and the committee wanted to organize this competition that the band activities as the identity of Agriculture Agrifest Music event.  The stages through the participants is to carry out the stages of registration and finalist, participants immediately have anyone who is a best three bands. And the achievement of the best three, organizers gave awards in the form of certificates, trophies, cash, and its course are eligible to appear in the top event Agrifest. The winners of the three best bands in the competition are Extosic Collaboration oof Smansa, N.O.W and Friend, and Simponi. (arisugama)