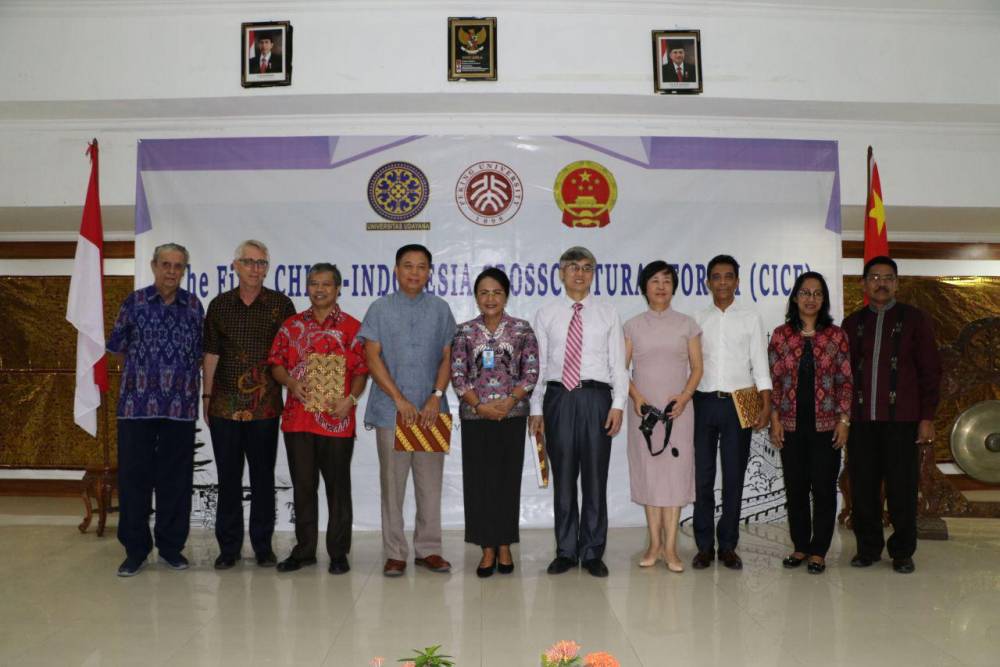 Udayana University in collaboration with the Consul General of the People's Republic of China (PRC) held the 1st China-Indonesia Cross-Cultural Forum (CICF) on Tuesday (1/22) in the Nusantara Room of the Agrokompleks Campus Campus Sudirman Denpasar. The implementation of the CICF was a follow up to the signing of the MoU between Unud and Consul General P.R. China Denpasar. Through this collaboration it is expected that various activities can be held in the fields of education and culture and other fields. Another thing that is also expected through the collaboration of Udayana University and the Chinese government is in realizing the Chinese Tourism Confucius Institute (CTCI) at Udayana University.

The forum was attended by the Consul General of PRC, Swiss Consul General, Italian Consul General, Dean of Tourism F., Director of the Center for International Program, Chair of CTTC Unud, Lecturers and students, presenting speakers Prof. Zhao Baisheng who is the Chair of The Institute of World Literature, Peking University's School of Foreign Language, and also a speaker from Udayana University namely Prof. Dr. I Nyoman Darma Putra, M. Litt, Ngurah Paramartha. The forum was held in two sessions, for the first session was The 1st China-Indonesia Cross-Culture Forum (CICF), and continued with the second session, namely the Workshop on Asian Literature as World Literature. The implementation of CICF is very important considering the relationship between the Cultural Diplomacy between Chinese Culture and Indonesian Culture, especially Bali, which has been around for thousands of years which gave birth to acculturation of Chinese-Balinese culture.

Rector of Unud, Prof. AA Raka Sudewi in his speech hoped that through this forum it could improve cultural understanding, strengthen cooperation in the field of education, exchange students and lecturers, program internship, research collaboration (research collaboration), international seminars and others, so as to strengthen friendship between Indonesia and China . (HM)